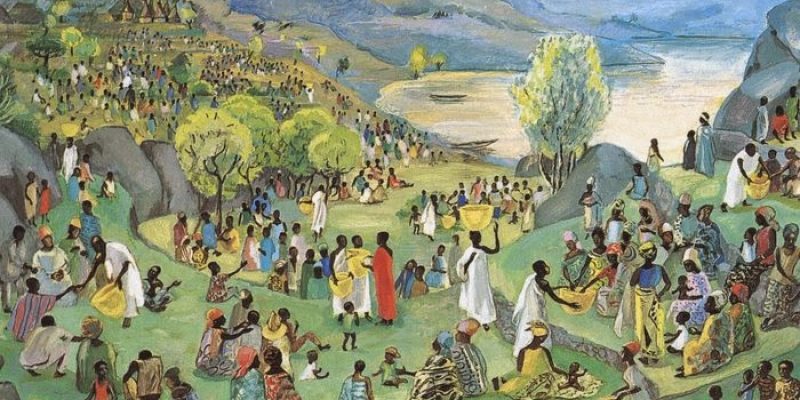 Is it a Miracle?

Now when Jesus heard this, he withdrew from there in a boat to a deserted place by himself. But when the crowds heard it, they followed him on foot from the towns. When he went ashore, he saw a great crowd; and he had compassion for them and cured their sick. When it was evening, the disciples came to him and said, “This is a deserted place, and the hour is now late; send the crowds away so that they may go into the villages and buy food for themselves.” Jesus said to them, “They need not go away; you give them something to eat.” They replied, “We have nothing here but five loaves and two fish.” And he said, “Bring them here to me.” Then he ordered the crowds to sit down on the grass. Taking the five loaves and the two fish, he looked up to heaven, and blessed and broke the loaves, and gave them to the disciples, and the disciples gave them to the crowds. And all ate and were filled; and they took up what was left over of the broken pieces, twelve baskets full. And those who ate were about five thousand men, besides women and children.

We may not be able to explain the great and small, every day miracles that fill our lives, but perhaps that is part of the gift of it all. With every miracle, we experience the in-breaking of God’s kingdom and an opportunity to respond in our compassion for one another.
In a minute we will share the words of the Apostle’s Creed. Somehow (miraculously?) these words have lasted thousands of years, connecting us to the early Christians of the first century, and uniting us with faith in a God more mysterious and alive than any words could ever contain. These words are our attempt to explain a God beyond our meager vocabulary, a God who creates, lives with us, saves, connects, and unites beyond space and time because that is simply who God is. Would it take a miracle for you to believe that? Would it take a miracle for us to live like that is the God we believe in, the Jesus we follow, the way we live? Maybe it would, but the beauty of it all is that our God is a miraculous God. Let’s live like we believe it, let’s live in awareness of who God is – an experience of who God is, and share the good news.